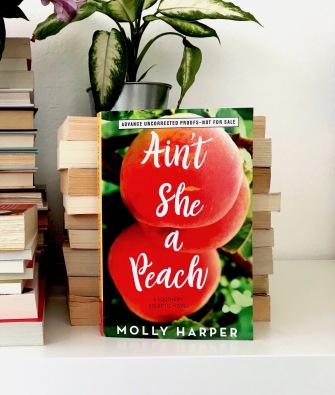 An Atlanta ex-cop comes to sleepy Lake Sackett, Georgia, seeking peace and quiet—but he hasn’t bargained on falling for Frankie, the cutest coroner he’s ever met.

Frankie McCready talks to dead people. Not like a ghost whisperer or anything—but it seems rude to embalm them and not at least say hello.

Fortunately, at the McCready Family Funeral Home & Bait Shop, Frankie’s eccentricities fit right in. Lake Sackett’s embalmer and county coroner, Frankie’s goth styling and passion for nerd culture mean she’s not your typical Southern girl, but the McCreadys are hardly your typical Southern family. Led by Great-Aunt Tootie, the gambling, boozing, dog-collecting matriarch of the family, everyone looks out for one another—which usually means getting up in everyone else’s business.

Maybe that’s why Frankie is so fascinated by new sheriff Eric Linden…a recent transplant from Atlanta, he sees a homicide in every hunting accident or boat crash, which seems a little paranoid for this sleepy tourist town. What’s he so worried about? And what kind of cop can get a job with the Atlanta PD but can’t stand to look at a dead body?

Frankie has other questions that need answering first—namely, who’s behind the recent break-in attempts at the funeral home, and how can she stop them? This one really does seem like a job for the sheriff—and as Frankie and Eric do their best Scooby-Doo impressions to catch their man, they get closer to spilling some secrets they thought were buried forever.

When I picked this book up, I didn’t realize it was part of a series. It is a series of standalones, meaning you don’t technically need to read the previous books in the series to follow along with the subsequent books. However, I think it would have enhanced my reading experience if I had read the first book as well as the novellas before reading this one.

AIN’T SHE A PEACH follows Frankie as she works as the country coroner and the embalmer at her family’s funeral home. She’s in her late twenties, still lives at home with her parents, and is having trouble asserting her independence from them. She joins forces with the new sheriff, Eric, to try to catch who is breaking in and vandalizing the funeral home.

This book made me laugh, a lot. The sense of humor was wonderful and it was especially witty. It is a light and fun read that is perfect for reading on vacation. I went into the book expecting a lot of romance since that is what it’s categorized as, but I was a little disappointed. The majority of the book focused on Frankie learning to gain independence from her overprotective parents and figuring out who keeps breaking into the funeral home. We did not get a ton of romantic interaction between Eric and Frankie.

It was clear that the two of them had a history of some kind, but it was really glossed over. As someone who hasn’t read the previous books, I desperately wished the author had gone more in-depth about their past. It could have really enhanced the chemistry between Frankie and Eric because a lot of the book they are just trying to get along professionally. This ‘thing’ that happened between them in the past, also seemed like it deserved much more attention in my opinion. Overall, this didn’t feel like a romance book. It felt more straightforward commercial or women’s fiction. Which I would have been fine with if I had known that going into the book.

Frankie lives in a small town in Georgia surrounded by her extended family. I loved this! Even though she’s an only child, she has close relationships with her cousins and the scenes when they were supporting Frankie were some of my favorites in the book. I also liked how Frankie learned, albeit slowly, to assert her independence from her parents. She really coddles them at the beginning of the book, and I was a bit irritated on her behalf for how her parents controlled a lot of her life. It was great to see Frankie finally separate herself from them and really start to live her own life.

In the end, I felt the romance aspect was missing from the story, but overall I still enjoyed the book and this won’t deter me from going back and reading the other books in the series!

I received a free copy of this book from the publisher in exchange for an honest review.

Disclosure: Some of the links above are affiliate links, meaning, at no additional cost to you, I will earn a commission if you click through and make a purchase. This commission helps to maintain this blog.